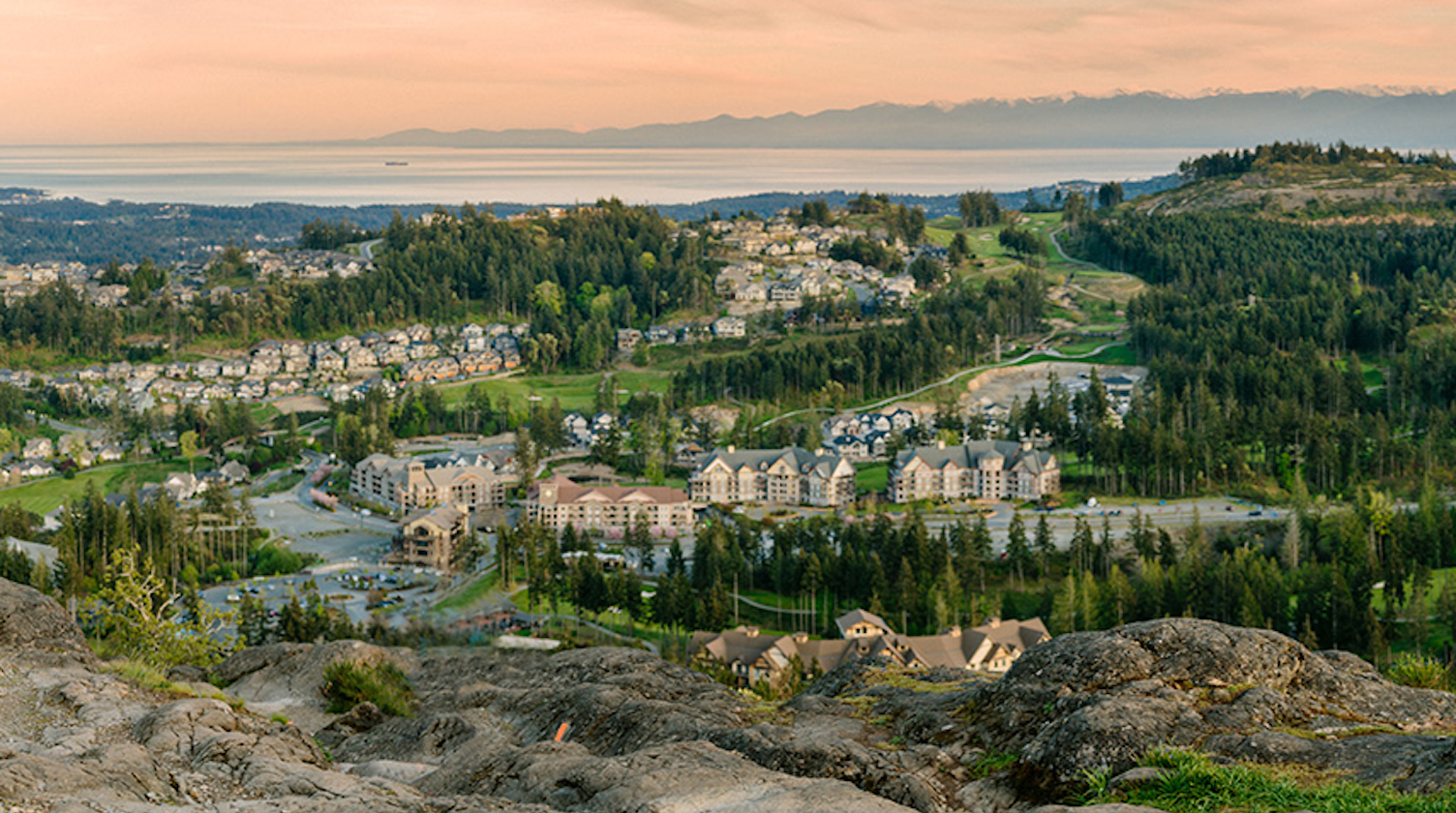 The golfing world’s eyes have been fixed on Bear Mountain, just outside Victoria, over the past few weeks, as the PGA Tour 2016 Pacific Links Championship took place on one of the golf resort’s two Nicklaus Design mountainside courses September 19-25.

Colin Montgomerie may have walked off with the title, but the real winner here has to be Dan Matthews, chief executive and co-owner of the resort’s development company Ecoasis. With so much global attention focused on his resort, inquiries about homes for sale or under construction have gone through the roof – even causing their website to grind to a halt, according to real estate projects co-ordinator Ruthanne Doyle. “The Pacific Links Bear Mountain Championship (PGA) resulted in significant online registration requesting more information on all of our real estate offerings,” she told REW.ca. “We had to increase the size of our server to accommodate all of the interest.”

All this is great news for the company, which previously developed a ski-in-ski-out community in Whistler’s Creekside and is building homes at the Hualalai Resort in Hawaii, and bought Bear Mountain at a discount from HSBC Canada in 2013 after the bank took it back from its previous owner.

With Bear Mountain’s former owner running into financial trouble, residential and commercial development at the resort, which had reached a population of 3,000, had stalled. The resort received a slew of negative press at that time, with former owner Len Barrie suing the resort’s former accountants for allegedly causing significant economic loss, as well as being subject to a three-year RCMP investigation himself following complaints from high-profile residents – charges for which were never laid against him.

But new owner Matthews saw through the stigma, and took the opportunity to develop the highly promising 806-acre Bear Mountain site into a world-class resort community. “[The controversy is] what was exciting about it,” said Matthews with a laugh.

The developer had a good base to start from, with the already established country club and residences just a 22-minute drive away from downtown Victoria, and a similar helicopter-flight time from downtown Vancouver. The mountainside resort is serviced by local transit, and had 3,000-plus mostly full-time residents already established in 1,200 (largely single-family) homes, comprising all ages, from young families to baby boomers. It also already had a large, luxury, Westin-branded hotel with high-end restaurants and a Sante Spa, as well as a separate pub and corner grocery market – and, of course, those two championship-level golf courses with breathtaking views of Mount Baker, the San Juan Islands, Victoria and the Olympic Peninsula. And all this close to the top local public and private schools and healthcare facilities of Langford and Victoria.

Over the past three years, the Ecoasis team has been working with the incumbent Bear Mountain residents to create a masterplan to expand the residential element by 2,850 new homes to house a total population of around 10,000. It will also add a commercial “village” centre and further recreational facilities.

“We wanted to take advantage of the community, of their experience and knowledge and really engage with them in the creation of the masterplan,” said Matthews. “We came in with an idea, but that vision could not be realized without the input of the residents of Bear Mountain. The only way we could do that was to plan carefully and to take the time, and it continues via open houses and events. We’ve been able to get hundreds of residents coming out to those open houses, and every one of them has helped the vision come together.”

Many hiking and mountain biking trails have already been created, as well as a competitive-level mountain bike park, but when fully built out the trails will total 15 kilometres. The resort is also planning a state-of-the-art, indoor-outdoor, clay-courts tennis centre that can host major tournaments, and there are also proposals for a mountain gondola and a helipad with regular charter flights.

When built, the village centre will have 300,000 square feet of commercial space available, including a high street with shops, restaurants, bars and businesses, which will be pedestrianized during peak shopping and dining hours, with road traffic allowed at other times.

New road infrastructure is also set to start in October, which will make it much easier to get in and out of the resort, with a new direct highway connection that will also improve local transit connections.

The residential component of the masterplan will be phased out over the next 10 to 15 years, with the earliest of those homes, the new Cypress Mews townhome development, which is about to launch pre-sales, and the Cypress Gates detached home development (see both in photo gallery above).

Cypress Mews homes is a development of 15 high-end townhouses in a West Coast contemporary design that will be built to a certified Built Green standard and include luxury finishings, which will be priced in the upper $600,000s.

Cypress Gates is an 18-unit executive villas project that will offer spectacular golf course and Mount Finlayson views in a private gated enclave. These homes will be approximately 2,500 square feet and start at just over $1 million.

In addition to the townhomes and villas, phase one of the Cypress development also contains a group of 27 single-family lots, which are staggered down the hillside with golf holes on either side. Phase one of these lots are now sold out, and have either sold to individual buyers, who can choose from one of the seven construction companies on Ecoasis’ Designated Builders Program preferred partner list to build a home on the lot, or sold directly to those builders. However, more lots will be released in the coming weeks, said Doyle.

The seven building companies on the preferred builder list will each work within Ecoasis’ set construction guidelines to construct Built Green-certified detached homes with pre-selected high-end finishings and appliance packages, which will then be made available for sale.

One of those builders, Cindy Scott of KC Custom Design, currently has a great way to showcase her talents in home design and construction – she is reselling her own house, which she built for her family in the early stages of Bear Mountain’s development, and is moving into a newer, larger home that her company is building. Media tour participants were lucky enough to get a home tour of Scott’s stunning course-view property, which is priced at $1.4 million – see photo gallery above.

Condos at Each End of the Price Scale

Concurrent with the Cypress projects, the company is building a new condo development, Elevate, which will be situated just down the hill from the Westin Bear Mountain hotel, taking in the same westerly views of Mount Baker and the resort’s lower Valley golf course. The sprawling building will have around 200 units in two wide, nine-storey towers atop a podium that is flat to the ground at the upper level, and drops down the mountain with a five-storey frontage at the lower entrance. The top of this podium will create another community hub, with entrances to the condo towers, ponds with walkways, a view terrace with common BBQ area, and a clubhouse with large infinity pool, patio spaces, cabanas, various gyms and indoor-outdoor kitchen. There will also be a concierge service, dog-washing station, underground parking and an electric car-charging station.

Elevate’s units, according to Ecoasis real estate manager Eric Gerlach, Ecoasis’ General Manager of Land Development for Bear Mountain, will range from flexibly designed 300-square-feet micro-units starting at around $150,000 to larger condos of 1,200 square feet priced up into the $600,000s.

“Buyers of the micro-units may range from Millennials looking for affordability to buyers who only want to live here for part of the year,” said Gerlach.

He added, “The larger units will be programmed flexibly too, so that a second bedroom or den can easily be used as a media room or part of the entertaining space, or closed off occasionally as a guest bedroom with a Murphy bed.

“Elevate will appeal at both ends of the demographic scale, but what appeals to all those age groups is the amenity-based lifestyle.”

Also already available for presale are condo units at the ultra-cool, Manhattan-style residences The Lofts, in which industrial, concrete-walled units range from 500 square feet for around $195,000 to 1,800-plus square feet for $695K. Plus there are other condo units and houses that are starting to become available for resale by their original owners, some of whom have been living at Bear Mountain since the first phase of development was completed 10 years ago.

The recreational perks of home ownership vary wildly depending on the home – and the timing of your application. With golf club membership at Bear Mountain highly sought after – and very expensive – only buyers of the highest-end homes will get golf membership thrown into the deal. New Cypress Gates and Mews homeowners, and Elevate condo owners, will be eligible to apply for golf membership within a certain time frame, after which applications are locked off to avoid overcrowding on the courses, and to keep some memberships available to non-residents. The same will apply to tennis membership when the new facility opens next year.

However, Elevate owners will benefit from the excellent facilities in their building, and all Bear Mountain home owners can apply for the Homeowner Card, which offers holders discounts on the hotel facilities, including the pool, restaurant and spa.

The Future of Bear Mountain

Zoning is already in place for another 2,500 homes to be built after the three upcoming projects, and there is available land for more homes beyond that. This is especially true of the high-ground, viewpoint end of the site, which overlooks Victoria and the ocean, and is relatively far from the Westin Hotel. A possible second hotel near this location has been mooted, as well as a possible extension to the existing hotel, such as a range of guest cottages that could be serviced by Westin.

With interest in home ownership at Bear Mountain so high, this resort community’s future is looking extremely bright right now. And once the world-class tennis facility is complete and the resort starts hosting tennis championships, it is likely to garner even more interest, particularly from the wealthy empty-nester demographic. Add to that the soaring interest in real estate in Victoria and environs, and the current lack of a foreign buyer tax on Island real estate, and you’ve got the beginnings of a resort community on a winning streak.

For more information on Bear Mountain, go to bearmountain.ca 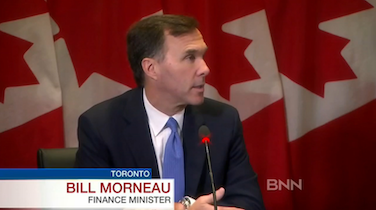 Finance minister announces new “stress test” on applicants for all insured mortgages, which...
Next Article

Finance minister announces new “stress test” on applicants for all insured mortgages, which...