The upmarket neighbourhood of Point Grey (also known as West Point Grey) occupies the far end of the Vancouver peninsula, stretching from the waterfront at Spanish Banks to 16th Avenue and from Alma Street to the University Endowment Lands.

Point Grey is also home to several unique attractions, including the Jericho army base on 4th Avenue and the Old Hastings Mill Store Museum the oldest building in Vancouver in Pioneer Park, adjacent to Jericho Beach.

Schools and Education in Point Grey

Point Grey Village, stretching along West 10th Avenue from Discover to Tolmie streets, is a great place to grab a coffee or enjoy a bite to eat. The area includes six sushi restaurants, two coffee shops and a range of ethnic cuisine, from Italian to Irish to Mediterranean and more.

When it comes to beaches, almost no other neighbourhood in Vancouver can beat Point Grey, which enjoys an uninterrupted stretch of sand from Spanish Banks in the west to Locarno Beach and Jericho Beach in the east. West Point Grey Community Centre, which occupies a Tudor-style mansion at the foot of Discovery Street, was used as an officer's mess hall during the Second World War. Today it consists of six facilities including a former carriage house and stable, which has been transformed into one of the city's best-equipped pottery studios. In other nearby buildings there are a gymnasium, fitness centre and the Jericho Arts Centre theatre.Due to its high-income residents, Point Grey also boasts a number of private clubs: the West Point Grey Golf & Country Club, the Jericho Tennis Club and the Royal Vancouver Yacht Club. However, the beachside Jericho Sailing Centre Association offers a low-cost alternative to members of the public who wish to participate in water sports. 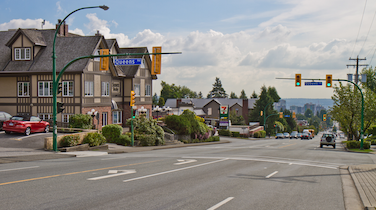 North of the Upper Levels Highway, the Upper Lonsdale community is one of the larger...
Next Article 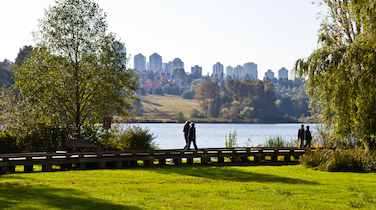 Deer Lake is a residential neighbourhood near the picturesque Deer Lake Park. The area is...